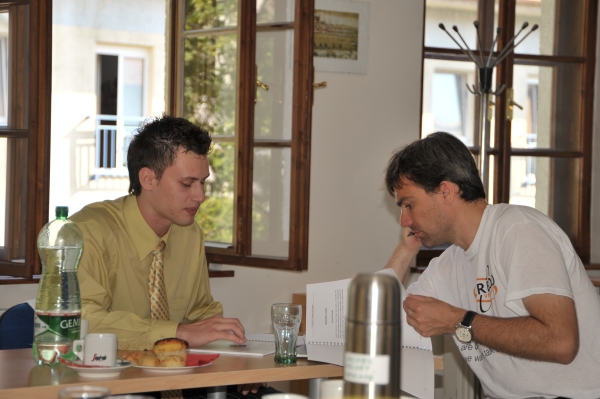 It feels that it was ages ago that I went to this trip. Yet, the last stop of Credo Week tour in Bratislava, Slovak Republic was less than two weeks ago. Here is what has happened on that sunny, summer day. The meetings were going on at a full speed as I have arrived to the venue of Credo Week’s last networking event. It has been organized by Jan Solik, the man behind the Association of Young Entrepreneurs of Slovak Republic.

Robert Nanista, the executive director of Emission, told me about his two projects. The first one is the production of inexpensive wireless sensor network systems for smart home automation. The components are compatible with most of the wireless protocols although Nanista believed the components based on Zigbee protocol will be too expensive.

The company is betting on venture investor to become a distribution partner for its products, if, for example, they are to branch out into the luxury segment. I gently disagreed with that assumption and suggested that a loan from the bank would be an easier route. Maybe, Credo Ventures will prove me wrong. Another project presented by Nanista was a display for meeting rooms wirelessly connected with the Microsoft outlook calendar. The display which is supposed to be mounted onto the wall shows the time the meeting rooms are occupied allowing employees to see the empty slots and use them for ad-hoc meetings. On the website, the company also offers a simpler option for meeting room occupation: a paper door hanger. Rastislav Turek is building his new super-stealth-mode startup Synopsi.tv, a website which offers a better way to recommend movies. Synopsi raised an undisclosed investment from Slovak super angels. Having previously found another company, also called Synopsi in the field of web security, Turek has already sold it to an Israeli firm but kept the name copyrighted. 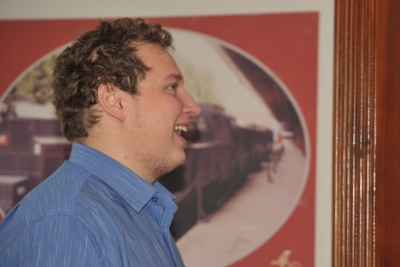 Investors were keen on Turek to relocate to Silicon Valley but he was certain about creating his new company in Slovakia. “Silicon Valley is not good for an entrepreneur,” believes Turek. “Any developer in the Silicon Valley would cost you over 100, 000 US dollars per annum, while in Slovakia, it would cost you ten times less. In Slovakia, you have to work much harder to maintain good standard of living,” he adds. Synopsi now employs 14 people. According to Turek, he hired “the best of the best.” Unwilling to disclose the approach to the revolutionary movie rating besides taking into account how movie preferences change with age, Turek, nevertheless, promised to include me into the beta testing.

The next conversation was with Martin Horvath who told me about Thapir, location-based service, a mobile application, which allows small merchants and retail chains alike make offers about their products or services to the passersby (those who own iPhone or an Android phones and have the application installed naturally). The beta version of the product will be rolled out in the central Europe in October 2011. Horvath is looking for 500, 000 Euros venture investment to support company’s marketing plans. The question whether or not small merchants will use the platform to advertise to the users directly has already been discussed in our article about Russian POIdo.

Afterwards, I spoke to Filip Caran and Roman Koci who were very excited about the success of Angry Birds games, and are developing mobile games themselves. We have not talked about the games they were working on but discussed how to promote mobile applications. I wish I had all the answers. Then, I finally caught up with Jan Solik, the organizer of the Credo Week. He told me about the first steps his association is doing in the direction of educating and preparing the entrepreneurs for the investment. According to Solik, the local business incubators have not yet learned to provide the value to the startups beyond the inexpensive work space. The association, however, aims to make a difference. Credo Ventures team mentioned that at the Bratislava events, unlike elsewhere at the other locations, the startups had sleek business plan presentations.

The association conducts a business plan competition organized by the Slovak Private Equity and Venture Capital Association and a business magazine, Profit. The winner which will be announced in November 2011 will have a chance to win up to 1 million Euros investment or negotiate the investment with individual business angels.

I have also exchange hellos with Jozef Pridavok of Mothiva, the CEO of the company which develops a cross-platform mobile development tool.

And finally, I spoke to Stefan Varga, the founder of touchqode.com, the smartphone code editor. It allows developers to scan through, edit and fix source code anytime anywhere as long as one has a smart phone. The idea behind it is the art of coding. The inspiration can come to a developer anywhere and having a tool handy to realize this inspiration, is touchqode. It was way beyond my technical knowledge of the coding process or inspiration behind it, however some thought that the application is fantastic. Others questioned the size of its potential client base. In Eastern Europe alone there are over 200 000 software developers. If all of them required a Touchqode tool for inspiration, and paid, let’s say two to ten dollars for the app, it would not constitute a sky-rocketing return for the investors, but could still make a good life-style business for the founders. 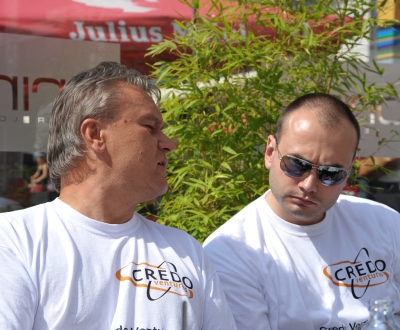 The event was over. The Credo Ventures team and the representatives of Slovak Entrepreneurs Associations as well as Turek from Synopsi went for lunch. I tagged along. Here is a team shot. The end.