The First Long Day: The Second Stop of Credo Week is Zagreb It is amazing how close Zagreb is to Ljubljana. It only took 1.5 hours of driving to get there. In fact, it is so close, that someone came up with an idea to include them into one country and call it Yugoslavia.

In Zagreb, over 80 people turned up to attend Credo Week. Most of them spoke impeccable English, thanks to the local television, which broadcasts Hollywood movies in the original language. Here is a short list of companies I had a chance to talk to but will expand on the list of the participants later.

The first entrepreneurs I spoke with have an idea for a mobile game, still have day jobs, and are looking for 10,000 Euros of seed funding. Then, there was Matija Marijan, the CEO of Entrio, a mobile ticketing company which was successful in raising angel investment.

A team of business consultants from Altinet talked about their web technology for hospitality and tourism industry (although it is still early to disclose it).

Vjeko Peretic told me about Moj-bankar.hr, whose business is similar to the UK’s Go Compare for financial services. 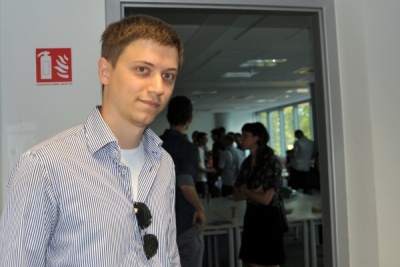 Filip Topol and Daniel Ackermann represented Mediatoolkit, a language-neutral media tool, which analyzes websites to determine which content is or will be popular in the near future. I found this interesting although I still have some questions whether or not this can be fine tuned to the industry-specific topics.

I have also spoken to Bojan Bajgoric Santic, the owner and chief editor of rep.hr, online technology publication. I have also briefly met Ivan Brezak Brkan, the founder of the Netokracija (now also available in English as netocratic.com), a blog about technology so popular, it is compared to TechCrunch of southeast Europe.

Berislav Lopac, the organizer of Crane Network, explained what issues the Croatian entrepreneurial community is facing including lack of technological sophistication amongst angel investors. More on this later this month.

Credo Ventures team mentioned Kliks.hr, the online shopping portal which secured seed funding, and a startup in a stealth mode, which is working on a mobile payment security system. Unfortunately this is not a full list, and I will follow this up with an update.

The impressions of the first long day of Credo Week were many. As predicted, the key observations were lack of seed and venture funding for the large entrepreneurial community in central and eastern Europe; and a relatively strong focus on social media, internet technologies and B2C applications. It is quite a difference compared to enterprise software solutions which come out of my existing software development network.