From funny to serious: in this recap we cover Looksery and the daily fantasy games, but also the innovative medical device invented by Zortrax, the maker of 3D printers. Looksery, the Odessa-based startup founded in 2013 by Viktor Shaburov and first crowdfunded on Kickstarter, is bought by Snapchat.

The terms of the deal are undisclosed and the parties declined to comment, but a market expert in an interview to AIN.UA estimates the valuation at $150M based on the number of Looksery patents (fifteen or so), the number of engineers and revenue.  Go to TechCrunch or AIN.UA (in Russian) to read further.

A month ago Oracle bought another Ukrainian company Maxymizer. This is a SaaS solution for website targetting and personalization based on the results of A/B testing, and it will be integrated Oracle Marketing Cloud.

The deal to be closed by the end of 2015, the pricetag is missing, but it is hefty.

The acquisition of Looksery and Maxymiser are so far the biggest deals in Ukrainian internet business. GetIntent, a global programmatic real-time bidding platform for online marketing, has raised $1M in the second seed round led by the Moscow-based Buran Ventures with participation from Thomas Falk.

GetIntent provides transparent and user-friendly access to RTB infrastructure for all types of ads - desktop, video, mobile and native ads - by offering two products: Self-Service DSP and RTB Suite. Using Self-Service DSP (demand-side platform) brands and ad agencies can start and manage campaigns on their own. The advantage is that GetIntent doesn’t set minimum budget requirements and charges a flat fee per 1000 impressions, not commission. RTB Suite is a solution for large companies enabling them to quickly build their own DSP.

Founded in 2013 in Russia by George Levin and Vladimir Klimontovich, in 2014 GetIntent had opened an office in NYC leading to a 100% revenue boost. Groupon, Uniliver, Ebay are among their customers.

The investment will be spent on extending the development office in Russia and strengthening sales and marketing in the US.

Here is the press release by GetIntent.

The social network Vkontakte is the most visited site in post-Soviet countries with over 70M average daily users. They announced the beta-version of the new section “Products VKontakte”, which will officially turn the site into a marketplace. Worth noting that goods and services were widely promoted via the social network, and many individual businessmen and companies use VKontakte communities as an efficient outlet for selling. Apparently, Mail.ru Group (the current owner of the website) decided to capitalize on this trend. The marketplace will start as free for sellers, but with the implementation of new functionality a monetization model will be applied.

Once VKontakte was a successful copycat of Facebook. Maybe this time Facebook should mimic the move of its younger brother? VKontakte was launched by Pavel Durov (who was forced to quit due to political reasons), the founder of Telegram messaging app. After numerous transactions Mail.ru acquired 100% of the shares and now the holdings owns the post-soviet social-networking world represented by VKontakte (320M registered users) and Odnoklassiniki (meaning Classmates in Russian, with 42.6M users). Yuri Milner, an investor in Xiaomi and Alibaba and co-owner of Mail.ru Group was ranked 23rd in the New Establishment List 2015 (The Disrupters) by Vanity Fair magazine.

Read more on the story on Lenta.ru (Russian). According to Statzup press-release, the investment will be used to enter the daily fantasy sports (DFS) market with 3 million players, and expand to the US and Canada. The specialty of daily fantasy game is that it offers new challenges every day, and users can win real cash prizes. But for America, Statzup will have to rebrand to TheFantasySoccer… 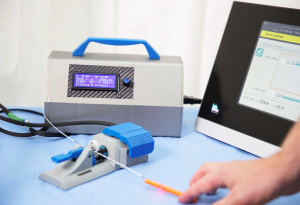 Compared to the traditional method, endovascular surgery is a complex, but more efficient and less painful approach for healing varicose. The optic fibre laser is introduced into the vein and it closes the vessels from inside. Despite its advantages, the method is very demanding towards doctor’s ability to move the optic fiber with the right speed.

The innovative device by Zortrax is designed to minimize the human factor by helping the doctor to move the optic fiber with stability and at a constant speed. They filed for patents in Poland and abroad. It is already used to treat patients in a clinic near Warsaw, and, according Marcin Feliga, MD, it helped to reach almost 100% rate in proper vein closing compared to the global statistics of 80-85%. Read more in the press-release.