Gamify career planning in IT: on Nordeus, hackathons and their purpose 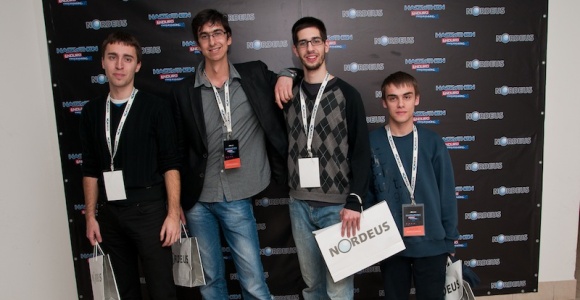 Outsourcing executives in Eastern Europe know too well that software developers are quite spoilt with job offers. As industry grows, the most talented programmers are courted by small and large IT firms alike.

Nordeus is perhaps one of few employers which do not need advertisement. Serbian game developer and a publisher of a successful social football game “Top Eleven” is bootstrapped and profitable. Ahead of FIFA Superstars by a large margin, Top Eleven boasts over one million daily players, and the game is already available on iOS and Android platforms. It will be no exaggeration to say that the company is a star of Serbian tech industry and a major success story. So when the company announced that it began accepting applications for the first ever 24-hour gaming hackathon organized in Serbia last December, over 150 people applied to participate.

Serbia, the country with just over 7 million people is a home for a fledgling outsourcing industry and a host to multinationals such as Cisco Systems, Ericsson, IBM, INTEL, Microsoft, Motorola, Oracle, Redhat, Siemens, and T-Mobile. The country’ investment agency SIEPA helps international corporations set up in Serbia, and the government offers tax incentives to the foreign investors. So the war on IT talent is set to heat up in Serbia just like in Ukraine or Belarus.

Yet, 50 percent of IT engineering students of the University of Belgrade showed interest in Nordeus event, which is by far the highest response rate in the memory of Branco Milutinovic, the founder and CEO of Nordeus and a while back also a graduate of the IT Engineering school of the University.

So game development is a popular career path, it seems. A couple of month ago my Belarusian friend of many years shared with me that in Belarus, where outsourcing industry employs majority of the country’s IT specialists, people are “queuing” to join two local game developers there: Viaden Gaming and Wargaming.net, the developer of the browser-based game The World of Tanks which by December 2011 saw its community exceed 18 million players.

Yet Milutinovic believes that college students are not sufficiently aware of all of their career opportunities and this is what Nordeus is trying to change. By participating in a gaming hackathon they are expected to learn how challenging and creative process it can be and that developing games is fun and can produce great results in a short period of time. Last but not least objective of the hackathon was to offer the participants an opportunity to get to know the company. The entire staff of Nordeus, which currently employs 38 people, worked in shifts to support the contestants throughout the event.

EPAM, the prominent Eastern European outsourcing company with roots in Belarus, which has recently filed for an IPO, organizes hackathons regularly, but with a slightly different purpose, according to Marina Detinko, marketing manager at EPAM. Interestingly, some hackathons are based on client’s technology or a product, and the resulting applications may well be used by the client in the future product development. In any event, customer service and employee retention are the two important objectives.

In its office in Ukraine, EPAM organizes two hackathons this month, focusing on mobile technologies and JavaScript. But later this year, the outsourcer is planning a hackathon in Belarus, which is expected to attract over 200 participants and will be opened to everyone. Recruitment of the best engineers who show resilience and perform in a stressful environment, is one of its goals.

Back in 2008, the company began organizing so-called IT Jams Meet&Mix where software developers meet, participate in debates, network and party. The most recent IT Jam in Odessa, co-organized with 10 Ukrainian IT companies, attracted more than 2000 participants. Here is a video, mostly in Russian.

Going back to Nordeus, the company has already hired the entire winning team called “Delete This”, and will gradually hire 20 more, upon their graduation. Milutinovic is pleased with the overall results, “All teams were just great. So much talent, and they all want to build games for living”. For Nordeus the mission is accomplished, it seems.

Moldova is the least expensive nearshore outsourcing destination in Eastern Europe. But will it last?