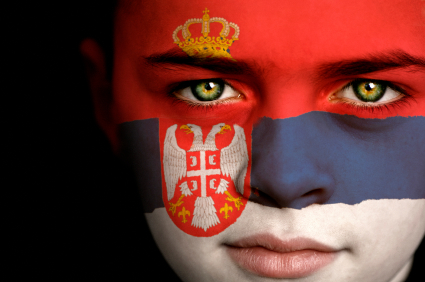 Preface: I have actually paid for this image, because I liked it so much. Later I came across numerous photographs with the same intense looking kid painted with Polish, English and other flags. For the sake of his skin I do hope that it was digital, rather than physical paint job.

SIEPA‘s website has a shiny feel to it. Serbia Investment and Export Promotion Agency is out there to get investments, jobs and revenue into the country beaten by the wars and subsequent economic slowdown.

According to Marko Cevizovic, the head of sales and marketing at PSTech, one of the country’s largest software development outsourcing companies, SIEPA supports companies at the international exhibitions, and offers various logistical, financial and legal help. For example, only recently SIEPA was involved in establishing PSTech branch in San Francisco.

PSTech, which exports 90 per cent of its services to the US, employs 140 software engineers. Other big employers of IT talent in the country include Comtrade, Asseco and Microsoft but SIEPA representatives support other large multinationals in helping develop a business case, get tax incentives and create new jobs for Serbian people.

For example, a company can get a government grant between 4,000 and 10,000 Euros depending on the number of jobs created. It can also be exempt from paying corporate income tax for 10 years, if it invests over Euro 8 million in fixed assets and employ over 100 people. There are various other incentives on offer which can be found here.

Despite these efforts, in 2010 only a little over 1 billion Euros of foreign capital has been invested in the country’s economy. SIEPA names FIAT, Telenor, Stada, US Steel, Michelin, Gazprom, Siemens, Intesa Sanpaolo amongst the largest foreign companies which established their operations in the country.

The main locations of software development and IT companies in Serbia are predictably Belgrade, with a population of 1.6 million people and Novi Sad, the second largest city which has only 300 000 inhabitants.

Cevizovic says that the best schools to hire software engineers are the Faculty of Electrical Engineering, Faculty of Organizational Sciences as well as Faculty of Mathematics of the University of Belgrade. The Serbian government is not very active in promoting IT education, but it does open free places for the applicants interested to study computer science. Getting the grant depends on their performance at the entrance exams. Tuition costs 2000 Euros per year, which is expensive for Serbs, so the students have to work hard to get the exams right.

According to Marija Holjevac of HR Solution recruitment company in Serbia, IT salaries are within a reasonable range. A .Net developer with 3 years working experience would earn between 800 and 1500 Euros net monthly salary depending on the location. Android developers in Serbia, as anywhere else in the world are in high demand and earn between 1000 and 1200 Euros. This may look like a bargain for a funded startup from the Silicon Valley, where Android experts earn 5 to 7 times as much. But one must take into account payroll taxes, which, according to Cevizovic may push the total cost of employment by 70%.

Another main expense item to consider when setting up a software development operation in Serbia is the cost of real estate. According to Aleksandar Jugovic, a director of Serbian real estate agency EuroRent, the average rent of a newly built office space is approximately Euro 15 to 20 per square meter per month which about the same as the real estate costs in some districts of Prague, Czech Republic or Bucharest, Romania. Additional costs apply for utilities, service fee as well as 18 per cent VAT.

Novi Sad is much smaller, but it also has excellent universities and graduates are not in a hurry to move elsewhere after the graduation. The salaries and rental space are on average 10 to 20 per cent lower.

Outsourcing efforts sometime spill into innovative fields. For example, PSTech created the world’s leading SugarCRM integrator with Cisco IT telephony. The licensing business model works out well for the company, which does nothing else but SEO optimization to get orders.

SIEPA’s latest success was to bring a large international call center company SITEL, about which I have written about here. Yet considering the generosity of government incentives, and the increasing interest in Eastern Europe as a software development outsourcing destination, more multinationals will follow.

Contact us if you need help with outsourcing or opening your R&D unit in Serbia or one of the other CEE countries.

The only startup from Eastern Europe has made it to Le Web's final. Go ARNav.eu!

Results of IT Jump Belarus: Games, Apps and Quoteroller