As the political uncertainty around Russia is increasing as a result of Crimea conflict, Fastlane Ventures has just published the report about Russian Internet Deal Book 2013 uncovering statistics on the past deals.

The key take-aways from the report include views on government participation, increasing maturity of the deals and anticipation of more exits in the coming years.

According to the report, 45 percent of investment volumes in 2013 were late stage deals compared to 13 percent in 2011. 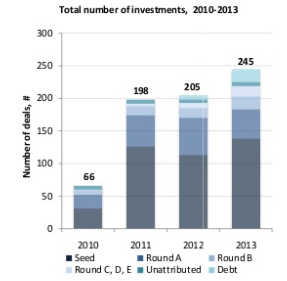 Most later stage deals are in ecommerce sector, 58 percent of all investment in Russia in 2013 but this is a 10 percent lower than in a previous year. Analysts see more investments in financial and advertisement services and gaming sector. 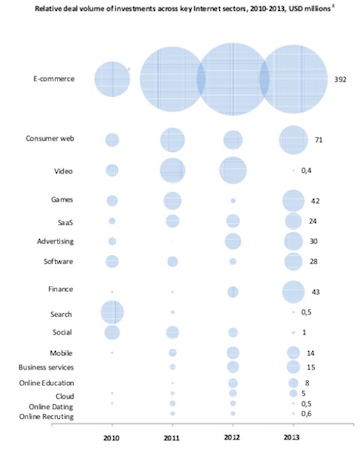 Another trend is reduced government participation – in 2013 there were 3 times less government grants than in 2011. Quite possibly because of the corruption scandals at Skolkovo although the organization announced in 2013 that it has secured further $4 billion for investments over the coming 7 years. According to the author of the report Andrey Kulikov, the venture investment in Russia becomes more mature: “Venture capital funds based in 2010-2012 are completing now their first investment cycle, and will have to raise capital again in 2014-15”. He also expects more exits from the companies created in 2006 - 2009.