This month Belarusian High-Tech Park announced that its resident companies have reported a 55% increase in their software and IT services export for the first half of 2011. GoalEurope takes a closer look at what is happening in the Belarusian software development industry.

Having neither sea nor mountains, Belarus is not exactly a tourist hotspot. Most people might have learned about the country for the first time when Yulya Nesterenko won the women’s 100 meter race in the Athens Olympics in 2004, or when they watched Sasha Rybak at Eurovision in 2009 (although he represented Norway).

In the meantime, its nearshore outsourcing industry is one of the most robust segments of the country’s economy. It is a popular destination for such global international companies as Peugeot, Mitsubishi, British Petroleum, Gazprom, Reuters, British Telecom, London Stock Exchange, World Bank, Coca-Cola and many others, which outsourced their software development to the Belarusian IT service providers. Here is why.

One of the reasons is the success of Belarusian High-Tech Park, whose resident companies have exported software and IT services for the amount of 160 million dollars in 2010. The Park was established with the main goal of supporting the software industry, and it works: High-Tech Park residents are exempt from all corporate taxes, including VAT, profit tax and customs duties. In addition, individual income tax has a fixed rate of 9% for the employees of the resident firms.

Six of the residents of the High-Tech Park are in the top one hundred of the world IT services leaders in 2011, including the leading Eastern European outsourcing companies EPAM and IBA.

“High-Tech Park is an excellent example of a productive collaboration between our government and industry,” says Nikolay Kuraev, CEO of Science Soft, a Minsk-based software development company. “The government offered benefits to the High-Tech Park residents in exchange for certain rules, which were accepted. As a result the government collected significantly higher taxes; in this instance Western practices of cooperation between industry and government worked in Belarusian business environment and the companies reacted extremely positively,” he adds.

In his interview to the Belarusian TV channel TUT Valery Tsepkalo, the Manging Director of High-Tech Park, said that there is potential for more. “The question is the quality of the education system and the size of the labour pool. Of course we were pleased to see the the lastest results of the centralised entry exams to the universities. In our industry the number of applicants per place was the highest in Republic of Belarus.”

The High-Tech Park aims to further increase the popularity of the IT profession. “We also help with professional orientation. For example this year we will offer high school students the opportunity to visit our companies to help them with their choice of what to study,” he explains. 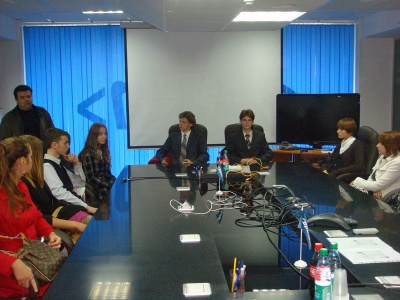 Each year about 16 000 specialists with ICT and related technical skills graduate from the Belarusian universities. Because of the quality of its technical education Belarus gained the reputation of a country with a high scientific potential and an essential pool of IT talent. It provides access to professionals with vast programming experience and strong mathematics backgrounds.

Another achievement of the software development industry worth mentioning is the free action game World of Tanks, which was developed by the Belarusian office of Wargaming.net. This popular game was included into the Guinness World Record Book in the category of Most Players Online Simultaneously on One MMO Server.

An important advantage of Belarus is its location and accessibility. It takes only two or three hours by air to get to Belarus from most European capitals, and the visas are issued directly at the airport. The time zone of GMT+2 makes the work with European customers more convenient. Price is also a factor; the service providers offer very reasonable project costs and rates. For example, a monthly net salary of a .Net software engineer with three years of work experience is $2000, although for some areas of expertise such as mobile development the potential for cost saving is diminishing.

All these developments, with the possible exception of Eurovision and Olympic victories, make a compelling case for a nearshore outsourcing industry in Belarus, which will continue to grow as long as the popularity of the IT profession amongst Belarusian students remains high.

Watch the full interview with Valery Tsepkalo in Russian.

Bucharest: the first choice of multinationals coming to Romania